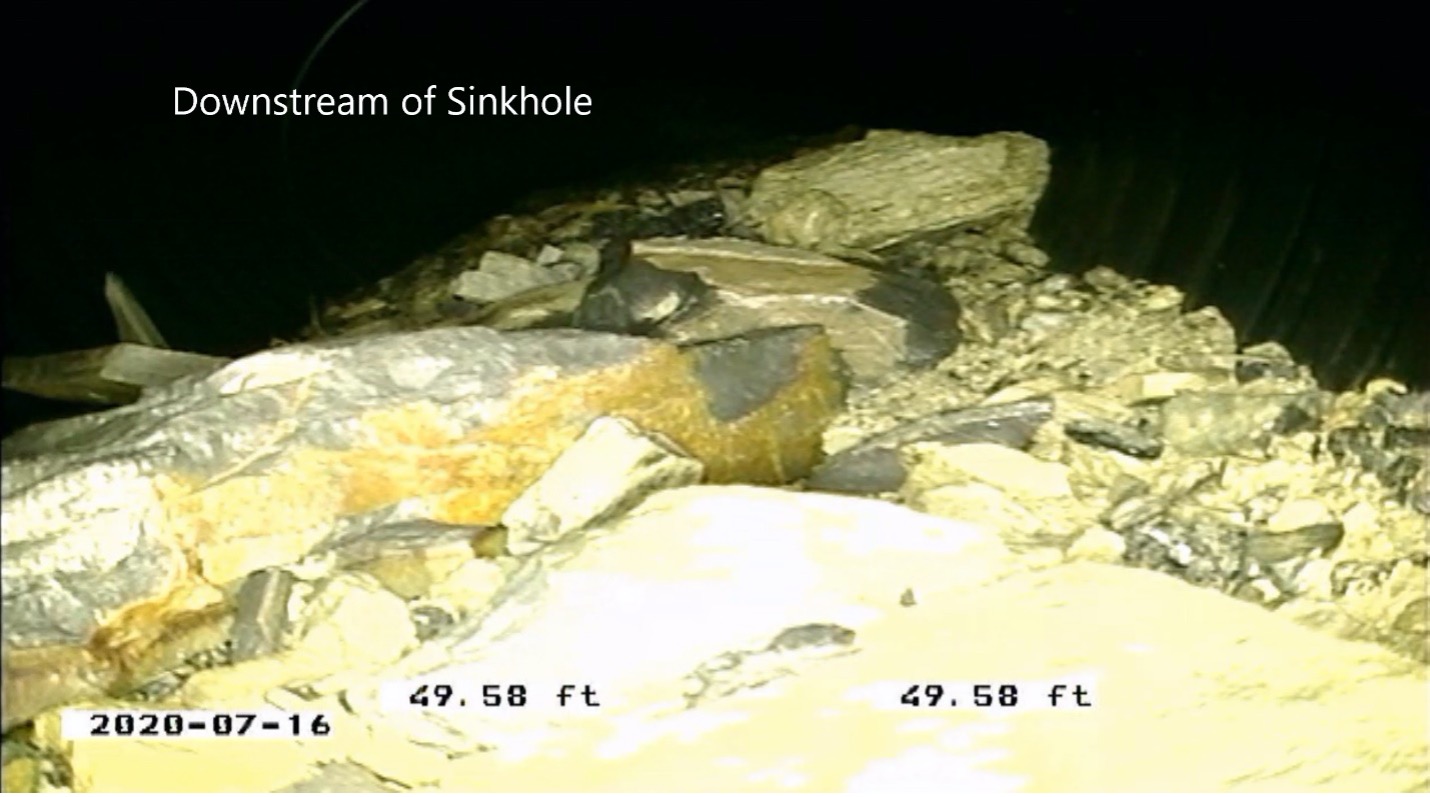 Ground Penetrating Radar Systems (GPRS) was hired to investigate the cause of a sinkhole in a shopping center parking lot in Raleigh,North Carolina. The sinkhole is in the area of well-known sewer system, which led the customer to believe that an issue with the storm pipes caused the sinkhole to form. The sinkhole creates a safety hazard for the shoppers walking near it and required a section of the parking lot to be closed off, reducing the amount of parking that they could offer to their customers. The client requested a Video Pipe Inspection (VPI) crew to be sent out to conduct a videocamera pipe inspection of the sewer pipes in the vicinity of the sinkhole to determine if this was the cause of their problem.

To perform the video pipe inspection an Envirosight CCTVRobotic mainline crawler was used. The storm pipes being inspected are 24inches in diameter and the robot was set atop of a carriage designed for large diameter pipe inspections. The robotic crawler was inserted into a catch basin with a pipe heading in the direction of the sinkhole. As the robot began to approach the area of the sinkhole, structural defects began to appear in the pipe such as cracks and deformities. At the location of the sinkhole, the top of the pipeline had collapsed, and large amounts of soil and stone could be seen entering the pipe confirming the clients’ suspicions. The client requested that we also investigate the section of pipe downstream from the collapse to see if the sewer pipe is now blocked by debris. The robot was inserted into a manhole upstream of the collapse and the pipeline was inspected from the opposite direction. Large amounts of soil and stone could be seen in the pipe which restricted the amount of water able to pass through the sewer line, decreasing the overall capability of the storm system. Sections of pipe further downstream were inspected showing that the soil and stones was traveling throughout the entire sewer system downstream of the collapse.

With the information provided by the video pipe inspection performed by GPRS, the client was able to determine that not only would the sinkhole, and pipe causing the sinkhole, need to be repaired but that the sewer lines downstream of the sinkhole would require jetting also to ensure that the storm system can perform properly. The client has now requested a proposal to inspect the entire storm system of the shopping center in order to identify any problems in the pipes that could lead to a similar situation down the road. By taking proactive measures now, and repairing any small problems in the sewer pipes, a situation like this happening again can be avoided saving our customer time and money.