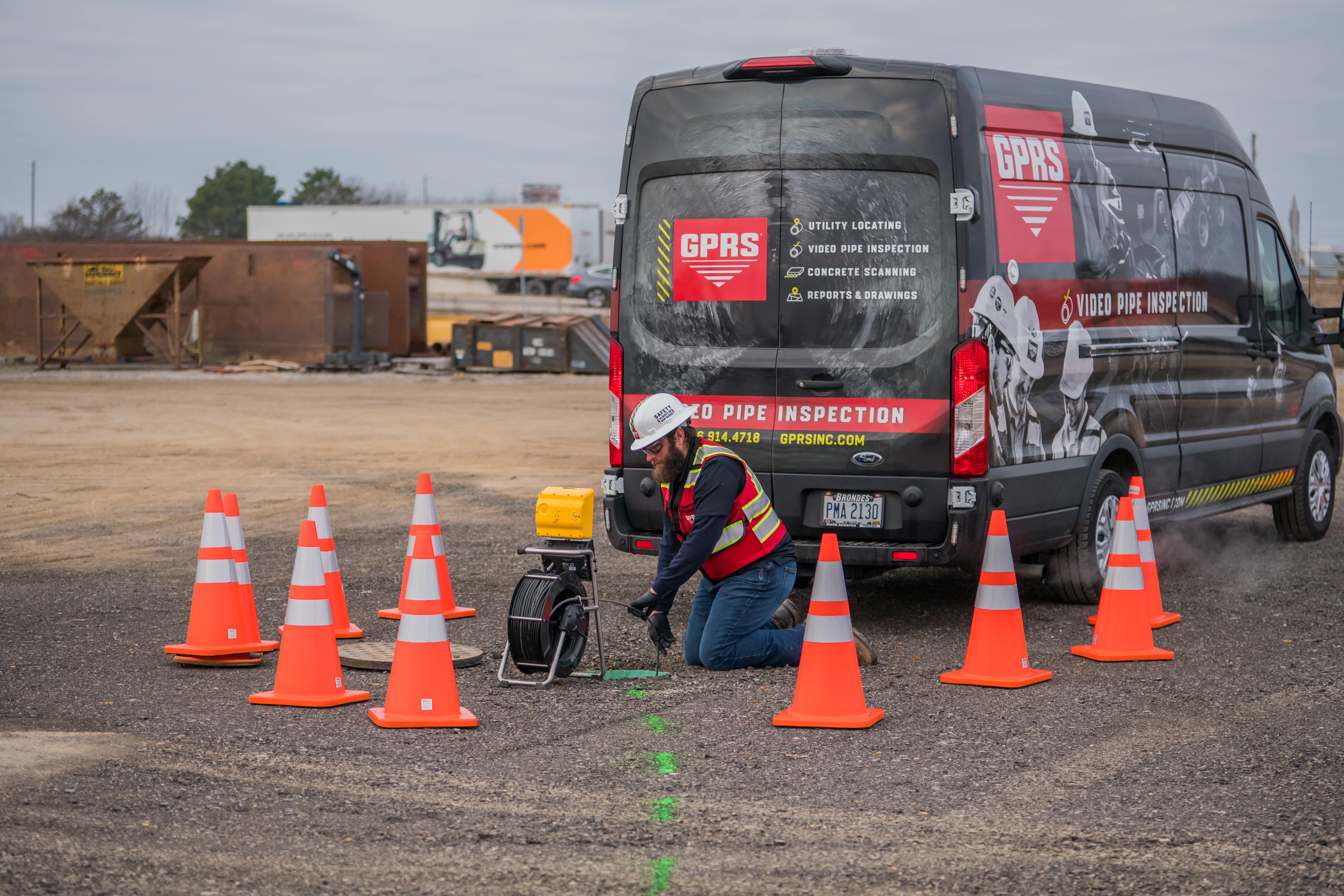 Ground Penetrating Radar Systems (GPRS) was recently contacted to investigate a dramatic increase in the water bill for a business park in Baltimore, Maryland. Investing in a day of leak detection services is a cost- effective way to resolve this issue, as the revenue loss will only continue, and potentially get worse, if ignored.

GPRS water loss specialist, Jeffrey L ail, was able to mobilize to the site and begin to investigate the reported water loss.  First, the client was consulted for information regarding the specifications of the water distribution system within the property.  It was revealed that the various buildings were fed from a 2-inch plastic water pipeline that passed through a meter pit very near the road. Other points of contact with the water pipe were identified, including a single yard hydrant, risers where the pipe entered the buildings, and a pothole exposing the water pipe along the main’s longest run.  The meter pit was inspected to determine that a leak was causing water loss of approximately 15,000 gallons per day.  Acoustic leak detection was then used to acoustically test all the contact points. Unfortunately, due to the poor acoustic continuity of plastic, all contact points tested were found to be absent of any discern able acoustic leak signal, except for the meter pit.  This gave the impression that the leak was near the meter pit, yet Jeffrey’s experience advised that this impression was false, as a meter can create pseudo leak signals due to the flow being throttled. Attempts were made to utilize a pipe leak noise correlate to calculate the distance a leak may be from each contact point, as it can sometimes detect leaks when the human ear cannot.  This was unsuccessful, however, as even the computers could not detect any discern able acoustic leak signal on the plastic line.  Ground penetrating radar was utilized to determine the location of the water pipeline, with limited success, as it could not be seen in certain sections due to ground conditions.  A suspected path was determined based on the contact points the water line connected to. As the water pipe ran under mostly soil topped ground, a metal probe rod was driven into the ground along the path of the water main, in five- foot increments, starting at the meter pit. In the areas where the water pipe could not be located, the probe rod was not only driven into the ground along its suspected path, but also in pipes perpendicular to it, in order to account for any deviation, it might take.  Each time the probe rod was driven into the ground, acoustic leak detection was utilized to test it for the presence of any discern able acoustic leak signal.  This process continued for several hours until reaching the very last building, where acoustic leak signal was observed in the ground.  The probe rod was moved in every direction from this point to determine the where the acoustic leak signal was strongest.  It was then determined that the pipe leak was located right next to the building, or possible just under it.  While Jeffrey was still on sight, the identified leak location was excavated, and a clean break in the water pipe was found approximately two feet under the building.  No water had been observed surfacing in this location prior to excavation, meaning that the leaking water was able to create a channel underground to escape.  The significance of this is, that in addition to the revenue lost due to this leak, the ground under the building was being undermined by the water flow, potentially creating far more expensive problems down the line if left unresolved.

GPRS has the capacity to provide many other non-invasive, subsurface services in addition to the leak detection project described here, such as utility location in Boston MA, comprehensive leak surveys in SyracuseNY, and pipeline pressure tests in Rochester NY, just to name a few.  To schedule a leak detection project in theBaltimore area, or to obtain more information about other GPRS services, please visit gprsinc.com or call 303-945-5415.

Note: GPRS does not provide geophysical, geological, land surveying or engineering services. If you need such services, please contact an appropriate professional.