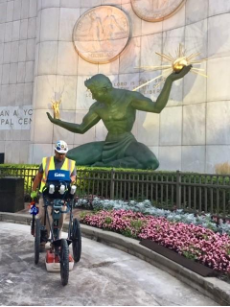 GPRS recently received a call from a local Detroit contractor to assist in a major renovation of one of the infamous buildings in the heart of downtown Detroit. The project consisted of a major renovation of the outside of the building which included all 3 entrances, parking lots, landscaping, sidewalks, and some of the facilities infrastructures.

The infamous building is located right next to Hart Plaza, one of downtown Detroit’s local hotspots. It spans 20 stories high and spans over 2 city blocks. The building is known as Coleman A Young Municipal Center. It is a government office building and courthouse. It was originally known as The City County Building and was named after Coleman Alexander Young. He was the first African-American Mayor of Detroit.

The building now serves as the City of Detroit’s Government Headquarters. One of GPRS’s main challenges was to locate all of the subsurface utilities and all other findings in all of the excavation locations. Locating in the heart of downtown Detroit was a challenge in itself.  One of the main focuses of the locate was to find the power source connecting the infamous Spirit of Detroit Statue to the Coleman A. Young Building.

There were no blueprints available, and after several attempts to troubleshoot the power source GPRS was not only successful in finding the source but gave the contractor the exact location and depths of the bank of conduit system feeding the statue.

“The Spirit of Detroit” is a Detroit icon, synonymous with the city itself and the dedication of those who love the Motor City.

The bronze monument sits on a 60-ton marble base and is located ,in front of the Coleman A. Young Municipal Center in the heart of downtown Detroit. He overlooks Detroit’s main drag of Woodward Avenue, and is a stone’s throw from Hart Plaza. Metro Detroit sculptor Marshall Frederick’s created the piece, starting work on the massive figure in the late 1950’s.

The 26-foot bronze monument was the largest cast statue made anywhere in the world since the Renaissance. The statue’s left hand grips a gilded sphere emanating rays that symbolizes divinity, while its right hand holds a family, which symbolizes all human relationships.

On the wall behind the sculpture the inscription from 2 Corinthians 3:17 reads: “Now the Lord is that Spirit: and where the Spirit of the Lord is, there is liberty,” along with the seals of both the city of Detroit and Wayne County.

GPRS’ ongoing commitment to accuracy, availability, and customer service has made us the professional choice for contractors in need of expert locating services in North America. GPRS has also been the most successful concrete scanning service provider in today’s competitive environment and has the ability to reduce and mitigate risk on any project.

GPRS is the best at what we do because it is all we do!

GPRS does not provide geophysical, geological, land surveying or engineering services.  If you need such services, please contact an appropriate professional.