This Is The GPRS Origin Story

Today, GPRS (Ground Penetrating Radar Systems) is the largest private utility locator in the United States, with a nationwide network of more than 300 project managers in more than 54 major metro areas.

That’s probably a big reason why GPRS has a 99.8% utility strike-free rate, which, again, far exceeds what is standard for private utility locators.

In fact, GPRS wouldn’t be what it is today if it weren’t for one fateful decision.

It was Dec. 23, 2001, and I had founded GPRS just over three months earlier. I was on a sales call in Detroit that day. I was driving back home, coming down I-275, and looked over at the airport and saw a tower crane. This was just a few months after 9/11, and there wasn’t a lot of work going on anywhere.

Something inside compelled me to go see what was going on. Between the terminal and the parking garage, there was this square 10-story building. I didn't know a lot about construction at the time, but I knew that this was an all-concrete building. And I saw post-tension cables, since they were in the process of building it. I thought, okay, so maybe there's an opportunity here — I had ground penetrating radar in the trunk and maybe this could be a potential job.

Prior to stopping by the job site, I had done one job scanning for post-tension cables. I think I had done three tiny jobs in total in the company's history. Total revenue billed by GPRS before this was $4,000. We were not paying the bills. And my patient wife with child was getting a little impatient. It was a low point. To be honest, I wondered if GPRS is a viable business for the first five years of its existence.

Anyway, after driving around the parking garage to have a look see, I discovered there was no signage saying what this was going to be. It was just a 10-story concrete building sitting there.

Driving out of the garage, I did notice a sign for Walbridge Aldinger (which is now called just Walbridge), which was a contractor based in Detroit. I then went south on that main access road underneath the tunnels, got off at Eureka Road, and right there at the corner between the access road and 275 is Trailer City. There's probably 30 or 40 job trailers for everyone who was working on this project like carpenters, plumbers, electricians, HVAC, painters, and more.

It was pretty dark, and it was late, probably 5:30 in the afternoon, when I was driving by. The gate was open, and it looked empty except for one BMW parked next to a trailer. I thought to myself that maybe the guy driving this car had some “say” on this job.

I got out of my car and walked into the Walbridge trailer. I knocked on the door, introduced myself and handed him a brochure (that I would absolutely be embarrassed to hand out today). He’s quiet as he begins to look over this little tri-fold and put's it down on his desk. He lifts his index finger and points it to the sky asking, "Are you telling me you can use this to find post-tension cables?"

And I said, "Yeah, it's one of the main applications for this technology." He said, "Alright."

And he said, "That hotel has 404 rooms, and I just got a notice from the architect that we have to move all the mechanicals in every room. So we have to drill for shower, tub, toilet flange, the hot and cold water, and sink drain in every single room in that hotel.”

“Plus, there's other stuff that needs to be moved. And we've already poured all the concrete. It's a post-tension building," he continued, and added, "We can't cut those cables. I've never heard of ground penetrating radar, but if you're telling me that you can do this, that you can mark out the steel on the surface, I can see why we would need this service. But it's December 23rd. Why don't you give me a call back after the first year and we can set up a demonstration on how your equipment works."

At this point, I didn't realize what an amazing opportunity this was going to be, but after the first year I called the guy, Gary Wolf, project executive. Turns out he was the top guy on this job site. And he says, "Yeah, I'm going to set you up with some of my superintendents, and if they think you know what you're doing, we're going to give you a shot."

In early January I returned to the airport. It's 5 degrees. There were no exterior walls on the building yet. Icy wind is just whipping through it, and... they walk me over to this spot. It's underneath the pool in the southwest corner of the building. One of the guys said, "All right, we want to drill three holes." One demonstration turned into two, two turned into three. At first it was just marking stuff out. But on the third demonstration, they said, "We've got driller here. You mark them, and we're going to drill them."

My heart was racing, I was sweating and praying that they didn't hit post-tension cable. I wasn't charging them for the service yet; this was just purely a demonstration of capabilities. I double checked, triple checked, before they started drilling.

They had a guy down below on the next floor catching the concrete as they completed the hole. He brought up all three core slugs and… drum roll, please… it was nothing but concrete! There was no steel in any of the slugs.

I breathed a huge sigh of relief.

One of the superintendents said, "All right, looks good to me," he said. "You might want to buy a condo in Romulus, because we're going to keep you busy for a long time."

So, my first stop at the site was Dec. 23. The job started right around the first week of February. Every day I would go with the plumbers and mark out the holes. They'd take me to the bathrooms, in each room. We went room, by room, by room, all around that hotel. I probably got 10 bathrooms done per day.

You may be wondering what the alternative to what we offered as back then. Well, there was the x-ray, which would've set the project back months, even years, if they had to x-ray everything. One of the main reasons for this slow pace was that you can't x-ray unless you have a 50-foot sphere around each shot with no people. So you have to clear out three floors below and coordinate your schedule with all 200 to 300 workers.

This would have been a nightmare.

Do you want to know the most chilling thing about this story? Every single time that I was on site, from February through October, there was a guard at the gate to the construction trailers. You had to have this little badge hanging from your rearview mirror in your truck to be granted access into the trailer yard.

But back on Dec. 23 at around 5:30 p.m. there was no guard on duty to stop me from going in and checking things out.

Here’s the moral of this whole story: If I didn't stop right then after driving past the job site, I don't know if we would've gotten the job. And if we didn't get that job, I don't know if GPRS would be what it is today.

They ended up drilling for 2,000 holes in that building. They hit one post-tension cable. It was my fault. The foreman told me “if you would've played your odds in Vegas then nobody would be working here. So we'll take care of getting this one fixed. It's not on you.”

This is a tremendous story of fate, ambition, and everything just coming together in one moment. But mostly it’s about luck.

I should tell you this in all my sales for the company I’ve never had a stop as good as this one. But it did inspire us to develop the One More Stop mindset.

Because it’s never just about that first job. This first big job led to many other jobs as this crew was gracious enough to let me take photos and put them into a brochure to hand out at other job sites. We got in at Bayview Electric and Pace Mechanical… even landed a job at Ford Field.

The reason for our One More Stop policy is to keep people as safe as possible.

Our mission is to achieve 100% subsurface damage prevention. We will not stop until there are zero accidents on jobsites everywhere.

I know without a doubt that when you apply this One More Stop mindset to your daily routine, good things will happen no matter what the task in front of you or goal you’re trying to achieve.

You never know if your one more stop could turn into a story like this.

Curious To Learn More About How We Achieve A 99.8% Accuracy Rating?

We standardized our team’s approach to Subsurface Investigation Methodology. Known as the GPRS SIM program, we combined the greatest technology with the best practices in analysis to train all of our personnel to become SIM Certified.
Contact Us Today! 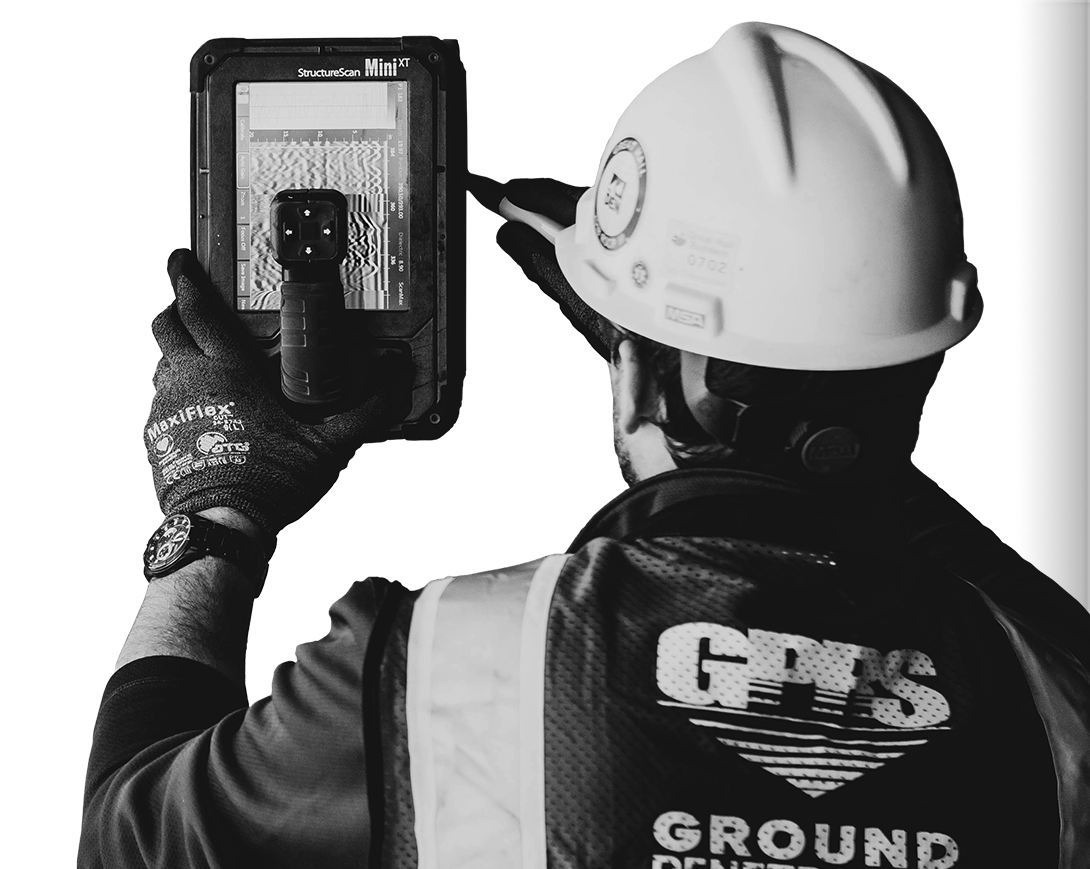 To ensure the overall timely success of your project, utility detection is critical to any construction project where a subsurface excavation is planned. If this critical first step is ignored, the risk for injury increases, budget overruns can multiply and your schedule can be delayed.
Learn More

With new build construction and renovation project, the likelihood of needing to cut or core concrete is high. There is an inherent risk of striking rebar, conduits, and post tension cables during the cutting or coring process. If a striking occurs, repair costs begin to add up, delays creep into your schedule and it creates a safety hazard for your employees.
Learn More

With new build construction and renovation project, the likelihood of needing to cut or core concrete is high. There is an inherent risk of striking rebar, conduits, and post tension cables during the cutting or coring process. If a striking occurs, repair costs begin to add up, delays creep into your schedule and it creates a safety hazard for your employees.

Let's Get To Work
Schedule A Project